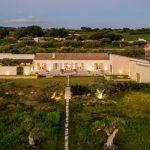 On the left is the walled garden and dining pergola. In the center is the living room, dining room, kitchen and 1 bedroom. The other 3 are in the annex on the right. The caretaker couple lives in the white building on the left. 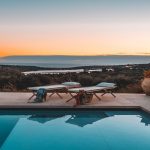 Sunset at the Casa Lurani, with the Ionian sea on the horizon. 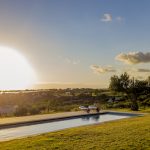 Facing west, the villa loooks out toward the sea and the sunset. 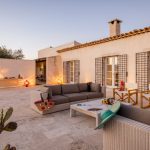 The villa’s outdoor living room is perfect for an evening aperitivo. 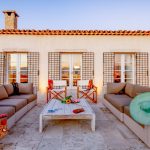 It has stylish outdoor furniture and a relaxed chic vibe. 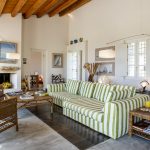 The casual chic look is carried into the interiors, as seen here in the living room. 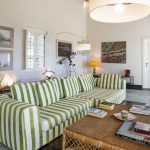 It has plenty of seating and a fireplace. 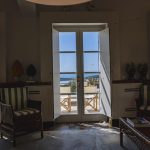 The living room looks out onto the terrace and the sea beyond. 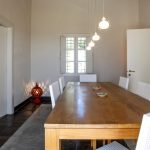 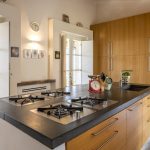 The well equipped kitchen connects directly to the indoor and outdoor dining areas. 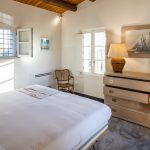 The bedrooms are crisp and bright with coloful accents. 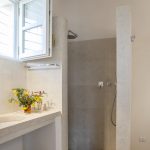 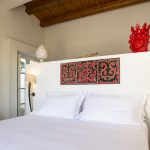 Exotic art and a sea theme is tastefully dotted throughout the bedrooms. 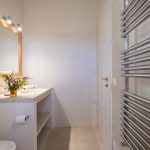 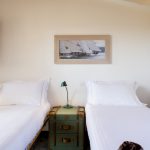 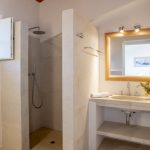 The twin room’s en-suite, also with a large shower. 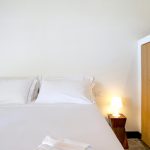 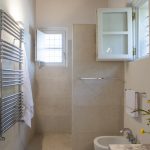 and its en-suite bathroom. 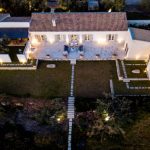 A bird’s eye view of the villa, dining pergola to the left, annex with bedrooms on the right. 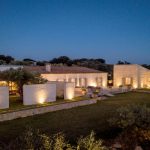 The evening ambiance is simply enchanting. 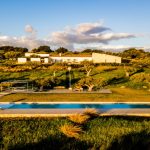 A full view of the villa, nestled in its completely private location. 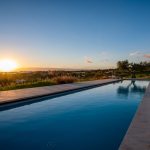 Spectacular Sicily awaits you at the Casa Lurani!

Casa Lurani
Sicily
Experience the best of southeastern Sicily, known for its cultural sites, picturesque countryside and golden beaches, at this stylish hideaway with an infinity pool and sweeping views over a gentle valley and out to the sea.

This beautifully restored farmhouse sits above a small valley dotted with carob trees, olive groves and cacti, with the sparkling Mediterrean sea on the horizon. It has a perfectly private location all the while being within easy access to beaches, elegant baroque towns and a range of important historic sites.

The villa is spread over two stone buildings; a main house and an annex. Wooden-beamed ceilings are contrasted with white walls and plenty of windows which let in lovely natural light and showcase the breathtaking views. These are complemented with a chic decor of modern furniture, antiques and art objects from around the globe. The living room has attractive furnishings and a beautiful slanted, beamed ceiling. The kitchen is equipped with new high quality appliances and has direct access to the indoor dining room as well as the outdoor terrace. The main house also has a double bedroom with an en-suite and three further en-suite bedrooms, two doubles and one twin, are found in the annex.

The villa has several outdoor areas, each one perfect for different times of day and your mood. The covered patio, nestled against the house and protected by freestanding walls, has a living and dining area. It also has drop-down blinds to protect from the heat and a projector for evening movie nights. In the evenings you’ll enjoy the large front terrace which has a sitting area complete with two large sofas and movable sunbeds. No matter where you are, you’ll have wonderful vistas of the pool and sea. The long infinity pool, with a shallow platform for lounging in the water, has been positioned lengthwise to maximize the views. Above the pool is a terrace with sunbeds and shade where you can relax and gaze out at the sloping valley descending to the sea.

There is an abundance of options for day trips from the villa. Only six kilometers from the villa is the Playa Grande, a protected nature reserve with a fine golden sand beach and a beach club where you can rent out sunbeds. The villa is located in the so-called “baroque” Sicily, where there are a number of enchanting baroque towns. The area was also put on the map by the popular TV drama Montalbano, which was set and filmed in the region. On your wanderings you’ll have the chance to pick up some exceptional local fruit, vegetables and fish, which you can enjoy during your meals back at the villa. Be sure to return back home to enjoy the spectacular sunsets over the valley, the perfect way to cap off a wonderful holiday in Sicily!

● Extra long infinity pool, 25x4 with salt filtration systeme
● Covered patio with outdoor living and dining area
● Outdoor movie projector
● Sun terrace with sofas and sunbeds
● The villa is surrounded by carob trees, olive groves and other local vegetation
● Sweeping views over a sloping valley and the sea throughout

Located in the south east of the Island, the so-called baroque Sicily, Casa Lurani makes a particularly attractive holiday location, combining the seaside with fascinating sightseeing.
There are an endless number of baroque towns, all grandeur and grace. These towns were once an architectural chaos of medieval, middle eastern and Punic style. They were shaken into a formal beauty by a devastating earthquake in 1693. New stones were cut, streets redesigned, avenues lengthened and straightened, staircases and grand churches all conceived with baroque grace.
• Nothing can prepare you to your first view of the enchanted, languorous, little town of Scicli, located just 15 minutes away from Casa Lurani. Take a walk in its central pedestrian street, via Mormino Penna, paved with pale, shiny stones that have the same colour as the palazzos left and right.
• Ragusa. With few cars, stone streets and views over the hillside, the town looks like a film set and often serves as one – many scenes from the Inspector Montalbano series. Ragusa is another city built over two hills. Ancient Ibla dates back to medieval times whilst the new Baroque Ragusa was built after 1693. The San Giorgio Duomo, the Circolo de Conversazione and the San Giuseppe Duomo are just a few of these beautiful baroque buildings that you will see as you walk from the Duomo to the magnificent Giardino Ibleo with its stunning views over the valley.
• Modica. The main street runs along the bottom of a ravine on which the town has been built. This divides the town into two parts. On the older part of the city, lanes and alleyways lead to the high part of the town. The town’s two baroque churches stand out amidst these beautiful buildings . The Duomo San Giorgio is the home of one of Modica’s patron saints, celebrated each year on April 23 with a joyful parade around the streets of Modica culminating with fireworks, whilst further along the main road, a set of magnificent stairs leads you to another, the Duomo di San Pietro. In the evening, join the locals for a « passeggiata » along the main street, Corso Umberto, and stop at the chocolate shops for which Modica is famous. When chocolate was discovered in the new world it was first brought back to Modica, where it was made cold so that the sugar did not melt. Northern Europeans later added heat and milk to the process but the old technique is still used here. Once you get over the initial graininess the chocolate has a rich, lingering flavour. Try the bars of the Antica Dolceria Bonajuto
• Noto is perhaps the most complete baroque town in the area. The stone used in it’s grand baroque style buildings, a soft tufa stone, has a unique pink colour giving it a special glow under the sun. The decorative details on the facades and balconies that line the streets behind Corso Vittorio Emanuele exemplify Sicilian baroque architecture at its best. Curved balconies, complete with wrought iron decoration and held up by grinning masks, lion heads or putti. Once a year, the Infiorata di Noto ensures the street is covered in flowers but at any other time, take a walk up this street to see some of the beautiful features that exemplify baroque architecture. Palazzo Nicolaci di Villadorata with its grotesque balconies is a prefect example.
• Syracuse is nearly 3,000 years old and during Ancient Greek times was one of the centres of the Mediterranean. The city was all but destroyed in 1693 by an earthquake that shook the bones of the whole island, but was rebuilt soon afterwards in glorious baroque style that remains mostly untouched. This is particularly the case on Ortigia, Syracuse’s old town set on a teardrop-shaped island connected to the mainland by a couple of road bridges. In the summer the place must sweat and heave: its tiny cobbled streets and perfect square are the kind that make postcard-sellers plan a new kitchen.
• The Necropolis of Pantalica, near Syracuse, contains no less than 5,000 tombs dating from the 13th to the 7th centuries BC
• Piazza Armerina is a charming town known for its Norman Palio, an annual summer pageant of medieval events, but the major attraction is its ancient Roman villa. Located a few kilometers outside town, the Villa Romana del Casale was built in the 4th century AC and is home to the richest, largest and most complex collection of Roman mosaics in the world. Depicting scenes from daily life, such as hunting, the mosaics are as remarkable for their sociological value as for their artistry.
• And for visitors interested in Hellenic art and architecture, Agrigento and the Valley of the Temples are a definite must-see
• Of course, the absolute must for any nature lover is a foray into the Etna Regional Park, one of the largest and most bewitching in Italy. The undisputed landmark of the island and one of the most active volcanoes in the world, Mount Etna has been since the Antiquity an object of awe and veneration, as well as the subject of countless myths and observations by Greeks, Celts and Romans. A guided tour of this majestic and legendary mountain – now a UNESCO World Heritage site – is undoubtedly one of the most exciting experiences you can have during your Sicilian holiday


To receive a complete overview of activities and sightseeing in the area, contact Katharina or Gaia at contact@excellence.villas We will promptly email you an exhaustive document.