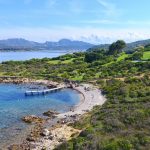 Located on the Costa Smeralda, the villa was private sea access and a virtually private beach. 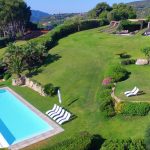 Villa Ala. the perfect luxurious, seaside getaway in Sardinia. 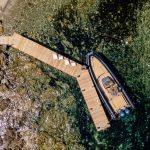 For extra glamour guests can arrive via the villa’s private jetty. 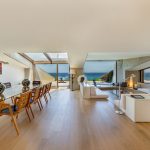 The interiors of the villa are airy, bright and sublimely stylish. 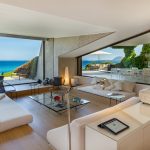 The sleek sitting area looks out towards the terrace and the sea. 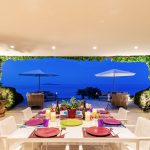 The covered terrace creates an enchanting ambiance at night. 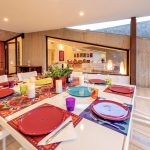 It’s perfect for your alfresco dinners with lovely sea views and breeze. 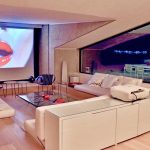 A large screen transforms the sitting area into a home cinema. 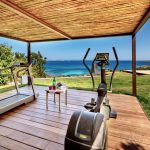 Keep up your workout routine with the seaviews to motivate you! 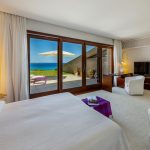 Each of the villa’s en-suite bedrooms has a unique and modern decor. 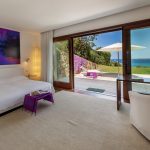 Some of the bedrooms also have their own private terraces with outdoor seating and sunbeds. 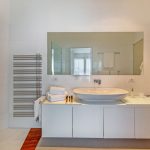 The bathrooms are equipped with luxurious fittings 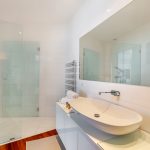 and have large showers… 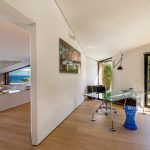 Next to the main living room is a quieter nook with an office and sitting area. 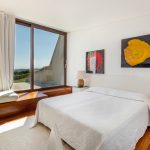 Snuggle up with your book in your bedroom, or lounge in the sun? You decide! 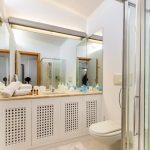 Another of the villa’s beautiful bathrooms, surrounded by mirrors. 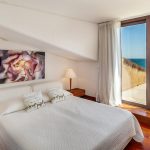 Wake up to these gorgeous vistas of the sea and sky… 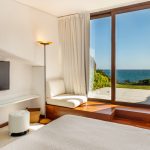 Each bedroom has a large screen TV. 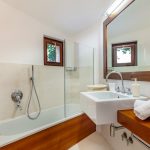 This en-suite is equipped with a luxurious tub. 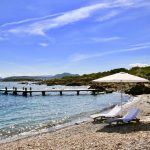 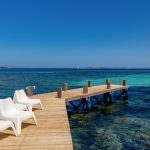 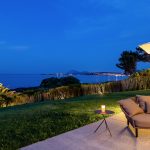 Buona notte from the Villa Ala!

Famous Italian architect Ferdinando Fagnola has created the ultimate contemporary holiday villa, constructed directly into a hillside on Sardinia’s coveted Costa Smeralda near Porto Cervo and Porto Rotondo. Within manicured grounds and with a backdrop of mountains, the villa combines contemporary style, luxurious amenities and soaring views of the crystal clear emerald sea.

The 500 m2 villa was built on one level into the hillside to maximize the views and provide a discreet hideaway for guests. The sleek interiors feature crisp white walls accented by colorful modern art and wall-to-ceiling windows looking out to the sea.

Rectangular in shape, the villa's open-plan living room divides the bedrooms into two sides, offering additional privacy and a central meeting point for guests. The living area has a long glass dining table with seating for 10 and a stylish sitting area with white leather sofas and home cinema with surround sound, satellite and Apple TV. Adjacent is an office area with a PC and printer, plus a sitting area. The large kitchen is equipped with new appliances and everything you need for dining and entertaining at the villa.

On one side of the villa is the large master suite with private terrace which is next to a single bedroom with bathroom, ideal for a family with young children. The other side is home to the five other bedrooms. All bedrooms have en-suite bathrooms and flat screen TVs and, three of them have personal terraces with sun-loungers facing the sea vistas towards Porto Rotondo, the Island of Mortorio and the Cala di Volpe Bay.

The villa’s other outdoor spaces are equally unique. The large panoramic terrace has a covered dining area with evening lighting as well as sunny and shady seating. There is an outdoor workout area with sea views to keep you motivated. Afterwards, cool down in the temperature controlled saltwater infinity pool before relaxing on the surrounding sunbeds to the blissful Mediterranean breeze. A few steps away is the villa’s secluded beach and private jetty.

In minutes by private boat you can get to other splendid beaches, the Cala di Volpe, Pitrizza and Romazzino Hotels in addition to Porto Cervo and Porto Rotondo where you can shop or enjoy the stylish nightlife of the Costa Smeralda.

• Pevero golf club. With a course that meanders its way along the Costa Smeralda, the Pevero Golf Club is immersed in a paradisiac landscape and is heralded as one of the most breathtaking and stunning golf courses in the world. In addition to the spectacular course, the Pevero Golf Club features an expert putting and pitching green, a bunker and chipping green, and a driving range with 20 outdoor and five indoor spaces perfect for instruction and practice. A golf pro is available for private lessons.
• La Celvia beach. Spiaggia La Celvia and its coarse sand, with a sandy and shallow floor together with blue waters contrast with the colors of granite rocks that surround it. Besides being one of the most popular beaches, it is the ideal place for those who love scuba diving.
• La Spiaggia del Principe. The Prince’s Beach (La Spiaggia del Principe) is located in a rugged cliff offering a breathtaking view where the sand is sorrounded by greenery and emerald water. It’s considered one of the several wonders in costa Smeralda and it’s always Prince Karim’s favourite place.
• La Piazzetta di Porto Cervo. Key meeting place for everyone and iconic landmark for the Porto Cervo village, in the evening this main Piazzetta (small square) gets enlivened by lots of people talking over drinks drinks and strolling the shops up to the old port, just across the wooden bridge, to contemplate the luxurious yachts moored.
• Stella Maris church. Built between 1968 and 1969 thanks to a project of the architect Michele Busiri Vici, it is based on the Mediterranean style, yet respecting the traditional division in three naves. The domed steeple continues the winding trend, defined outside from the chapels till the façade, preceded by an arcade carried by megaliths. Even the use of these stones, typical in the Island, is out of context, according to the “Smeraldinian” practice consisting in a revision of the building trade born from the mediation of a culture which was different from the one of today.
• San Pantaleo. A treasure set in the emerald countryside, San Pantaleo is a traditional village perched between the granite mountains of Gallura. Built in the early 19th century around a country church, San Pantaleo is today a timeless spot that welcomes visitors with the warm hospitality of its inhabitants and a simplicity that is hard to find nowadays: shops where craftsmen continue to ply their wares and artists’ workshops open up between the carefully restored low buildings. The majestic granite setting seems to preserve an almost enchanting tranquillity that is far removed from the perceived frenetic pace of life elsewhere on the Costa Smeralda. Visiting its street market – every tuesday morning – is a real must when you’re having your holidays in the north of Sardinia.
• Liscia Ruja beach. It lies in between the villages of Portisco and Cala di Volpe and widely considered to be one of the best beaches in Costa Smeralda. Liscia Ruja Beach is rather long and wide, making it ideal for long walks along the waterline in spring. Its dimensions somewhat increase your chance of finding a good spot in the morning, even during peak season in August. The sand is of a powdery white and fine quality and the water incredibly light blue.
• Nuraghe la Prisgiona. The Nuraghe La Prisgiona is a nuragic archaeological site (occupied from the 14th until the 9th century B.C.), located in the Capichera valley in the municipality of Arzachena, Costa Smeralda. It consists of a Nuraghe and a village comprising around 90-100 buildings, spread across 5 hectars. Due to the large extent and number of buildings, the site is considered unique in North-East Sardinia, particularly with regard to decoration and use. There is also some evidence for occupation during Roman and medieval times.