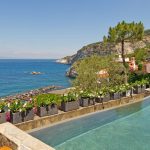 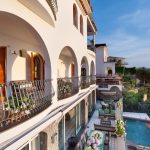 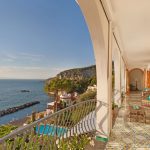 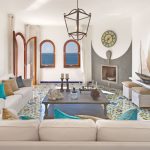 The villa has two entrances on the street level, the main entrance opens onto the stylish sitting area 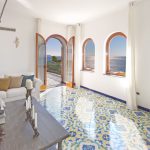 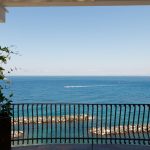 The sea views from the top floor are particularly superb 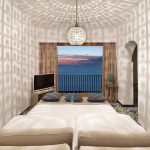 Bedroom I is a double with a separate large dressing, en-suite and wonderful views 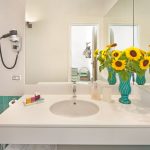 Each bathroom has a hairdryer, beauty set and luxurious fittings. 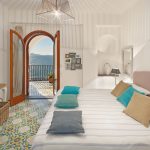 On the first floor are three additional bedrooms. Bedroom II has its own bathroom across the corridor 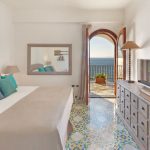 Like all bedrooms on this floor, Bedroom III opens onto the middle terrace 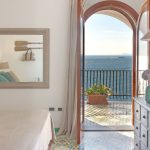 The mesmerizing vista of Bedroom III 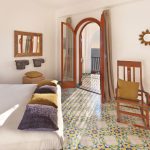 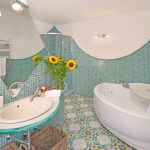 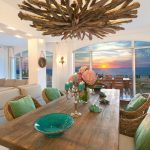 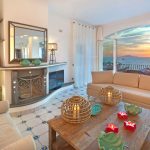 The earth tones, sophisticated sea-themed decor and fireplace create an inviting ambiance in the sitting area 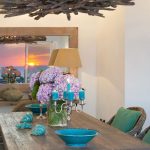 No matter where you sit around the dining table, you’ll be able to enjoy the sunset 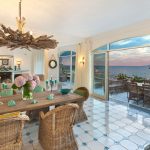 The villa has a wonderful indoor-outdoor flow 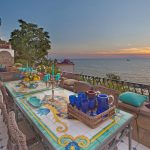 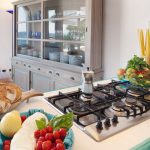 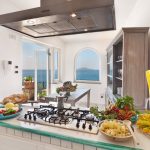 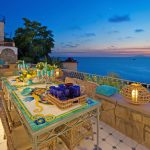 The evening atmosphere on the terrace is especially enchanting! 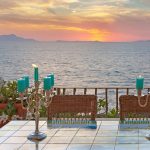 The dining table overlooks the tableau of the setting sun over the sea. 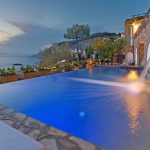 The unique infinity pool has a therapeutic hydro-massage area. 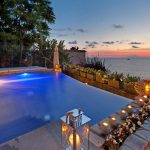 You can take in the stunning sunsets directly from the pool… 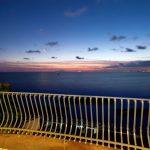 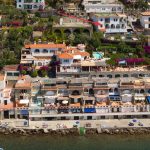 A bird’s eye view of the villa Annalisa and its location so close to the beach and sea.

Villa Annalisa
Amalfi Coast
Situated on the coast near Sorrento and walking distance from the beach, this recently renovated villa has bright elegant interiors, a new infinity pool, several terraces and breathtaking views over the Bay of Naples, Capri and the Neapolitan Riviera.

Nestled in the heart of the Neapolitan Riviera and only 8 km from Sorrento, this spacious four-bedroom villa offers the perfect setting for a stylish seaside holiday in Italy. In addition to its luxurious facilities, new pool and stunning sea views, the villa is next to a lovely beach, restaurants, shops and is a short car or boat ride away from the cultural and natural highlights of the Naples area.

Spread over three floors the newly renovated interiors are exceptionally inviting thanks to white walls and expansive windows offering a spectacular panorama of the Gulf of Naples, Capri and the city of Naples in the distance. This alluring ambiance is complemented by chic modern furnishings, creative lighting and colorful ceramic tiles.

The top floor has a cozy lounge with attractive seating and direct access to a lovely terrace overlooking the deep blue sea. This floor has one en-suite double whereas the other bedrooms are located on the lower middle floor. These bedrooms give way onto another long terrace with comfortable rattan chairs and share two bathrooms, although the master has its own en-suite with Jacuzzi tub.

The ground level has a spacious living and dining room with plush seating facing a fireplace, a dining area, floor to ceiling windows and french doors leading onto the main terrace. Adjacent is the ground floor bathroom and large well equipped kitchen. Outside on the main terrace guests can relax on the sun beds, have sunset aperitivos in the sitting area or prepare meals on the barbeque or wood burning pizza oven to be served at the tiled outdoor dining table. From here you can access the private garden which has a new infinity pool with a hydro massage corner, a waterfall shower and solarium area perfect for sunbathing.

If you would like a change of scenery, the beach is found only 100 meters from the villa. Here you can rent sunbeds and umbrellas or take a stroll over to the restaurants and bars that line the port. This is also the departure point for boat trips over to Capri, Ischia and the Amalfi Coast.

The villa is ideally located for visiting the treasures of Campania. Pompeii and Positano are only a 40-minute drive or within an hour you can reach Herculaneum and Naples. The Sorrentine Peninsula is also a dream for nature lovers with its excellent hiking trails that feature awe-inspiring coastal vistas.

• No-chlorine swimming pool overlooking the sea, with a hydro massage corner and an waterfall shower for massaging the cervical vertebra.
• The pool is surrounded by solarium area with sun beds and large mattresses for sunbathing
• Three terraces with soaring sea views, the main terrace has a sitting area, tiled dining table, barbecue and wood burning pizza oven
• Additional outdoor kitchen on the upper floor
• Table tennis for afternoon fun
• 100 meters away from the beach with sun-lounger and umbrellas rentals
• A 10-minute walk to the Massa Lubrense port with restaurants, bars and boat excursions to Capri, Ischia and the Amalfi Coast

• Panoramic views of the Gulf of Naples, Capri and the city of Naples in the distance
• Luminous interiors with sea views throughout thanks to large windows and French doors
• A classy decor mixing modern furniture, antiques, original lighting and colorful ceramic tiles on the floors and bathrooms
• Two living areas, including a large open space living and dining room with direct access onto the main terrace
• Four attractive bedrooms, two with en-suites and an additional three bathrooms
• Large fully equipped kitchen

• A/C throughout
• Internet WI-FI ADSL
• Satellite flat LCD TV-COLOR in the living area
• Each bedroom is equipped with TV with Sky in english
• Ortigia beauty set in each bathroom including soap, body wash, shampoo, conditioner and body cream
• Goods lift accessing each floor except pool level
• Wood burning oven and barbeque.
• Washing machine and dryer
• Parking space outside of the villa - The parking space at the villa is small and is not suitable for minivans.
• Safe
• Table Tennis
• Ice machine
• CD player

• In the late 1940's John Steinbeck visited Positano and became a life long devotee and launched Positano into the International Jet Set with Jackie Kennedy among others visiting and this popularity has not abated as today movie stars and the wealthy of the world also come to vacation as well magnates of the DotCom society and their yachts. The charm and attraction of Positano seems limitless and eternal to all who have come to visit and an unforgettable experience for all visitors.
Gaze in admiration at the white- and pastel-colored houses that smatter the hillside, and perhaps take a stroll along its perfectly groomed beaches. Positano has also become world famous for beach fashions of brightly coloured robes, bikinis, bags and wraps all made in cool linen or cotton.
Positano is also filled with master cobblers, indeed, this is the place where to abandon your shoes and replace them with a pair of hand crafted sandals, made to measure while you wait.
• Not far from Positano, in the village of Praiano, spend an evening at l’Africana, an extraordinary club with cave setting, complete with natural blowholes and a glass dance floor so you can see confused looking fish swimming under your feet. Africana has been going since the '50s, when Jackie Kennedy was just one of the famous VIP guests.
• Ravello is a refined, polished town boasting impeccable bohemian credentials – Wagner, DH Lawrence and Virginia Woolf all spent time here – it’s today known for its ravishing gardens and stupendous views, the best in the world according to former resident Gore Vidal, and certainly the best on the coast. On Tuesday morning there’s a lively street market in Piazza Duomo, where you’ll find wine, mozzarella and olive oil, as well as discounted designer clothes.
• Picture-perfect town of Amalfi. Once a major naval power, the town is now known for its stunning coastal scenery; it clings to a jagged rock face looking down over the turquoise Tyrrhenian Sea. Enjoy free time here to stretch your legs on a walk around, admiring the town’s typically Mediterranean architecture, where houses seem to be built on top of each other as they straddle the hillside! Rest in one of the cafés and sample a shot of limoncello , or perhaps check out the Cloister of Paradise (Chiostro del Paradiso) -- an intriguing Arabian-style hamlet.
• Try the nearby two Michelin's stars restaurant Don Alfonso in Sant’Agata sui due Golfi. This restaurant is generally regarded as one of Italy’s finest. Dishes are prepared with products from the chef’s own 6-hectare farm. The dining hall is a picture of refined taste, and the international wine list is one of the country’s most extensive and best. The menu changes seasonally, but hallmark dishes include lightly seared tuna in red-pepper sauce and pasta with clams and courgettes.
• All the colors of the Amalfi Coast, the sea’s deep deep blue, the striking green forests and the golden orange of the citrus groves seem to meet up in Vietri, particularly in the glazes and decorations of this gorgeous Campanian town’s beautiful ceramics, produced since 1600. Named as UNESCO World Heritage in 1997, along with the rest of the Amalfi Coast, this community not far from Salerno was struck on a splendid site amidst hills and sea. Already inhabited in Antiquity, when it was the city of Marcina, Vietri, in addition to its enchanting coastline, is surrounded by magnificent Mediterranean vegetation.
• Visit the romantic town of Sorrento plenty of fine old shops selling ceramics, lacework and intarsio (marquetry items) – famously produced here. Sorrento makes a good base for catching the ferry to magic Capri island .
• A legendary idyll: Capri's beguiling combination of fabled beauty and hedonism has charmed Roman emperors, Russian revolutionaries and showbiz stars for decades. It’s the perfect microcosm of Mediterranean appeal – a smooth cocktail of chichi piazzas and cool cafes, Roman ruins and rugged seascapes. Already inhabited in the Palaeolithic period, Capri was briefly occupied by the Greeks before the Emperor Augustus made it his private playground and Tiberius retired here in AD 27. Its modern incarnation as a tourist centre dates from the early 20th century. It’s also a hugely popular day-trip destination and a summer favourite of holidaying VIPs. Inevitably, the two main centres, Capri Town and its uphill rival Anacapri, are almost entirely given over to tourism with the high prices that predictably follow. But explore beyond the effortlessly cool cafes and designer boutiques, and you’ll find that Capri retains an unspoiled charm, with grand villas, overgrown vegetable plots, sun-bleached peeling stucco and banks of brilliantly coloured bougainvillea. All of this overlooks the deep blue water that laps unseen into secluded coves and mysterious grottoes.
• Head inland toward the UNESCO World Heritage Site of Pompeii -- the world-famous ancient village that lay buried under layers of volcanic ash for centuries. Explore the area and discover the site’s history from AD 79 when Mount Vesuvius erupted, to the early 18th century when it was ‘discovered.