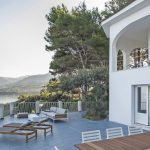 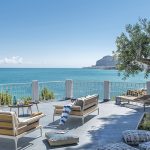 Sitting atop the sea, the villa’s location couldn’t be better 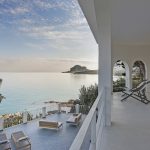 Dreamy views are enjoyed throughout the villa 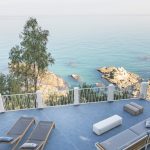 The terrace is right above the sparkling sea… 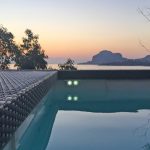 which is equally beautiful from the Jacuzzi and at sunset… 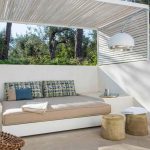 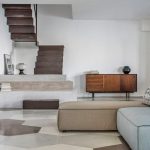 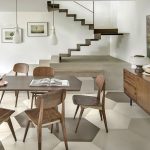 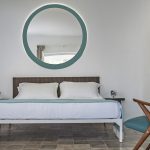 The bedrooms are all equally sophisticated 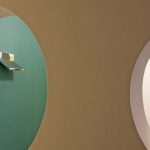 They also have unique bathrooms… 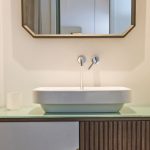 That are equipped with exquisite modern fittings 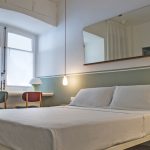 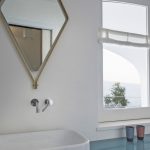 Attractive mirrors are another highlight of the bathrooms 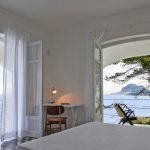 One of the bedrooms has a private balcony and the others… 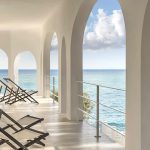 give way to a gorgeous long balcony with stupendous seaviews 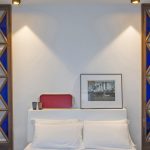 Another of the inviting bedrooms 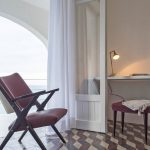 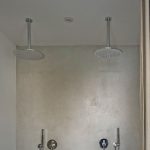 One bathroom has this romantic double shower… 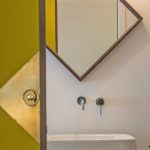 Every small detail has been considered in the interiors… 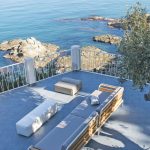 However, much of your time will likely be spent on the fabulous terrace 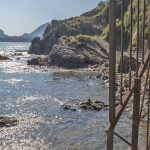 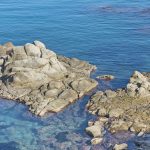 And take a dip in the paradisiacal turquoise waters 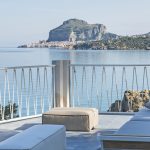 The views are truly breathtaking… 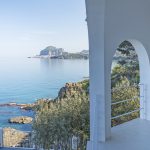 from every vantage point around the villa 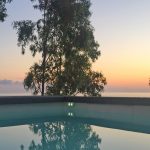 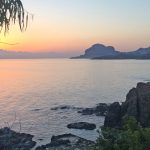 Every day is magical at La Maddalena…

La Maddalena
Sicily
Clinging to the cliffs above the Tyrrhenian Sea across from the picturesque town of Cefalù, this designer villa is the ultimate holiday home for stylish sun-seekers.

Located in the most idyllic seaside setting, renowned local architects have combined local Sicilian traditions, modern design and natural beauty in this sleek four-bedroom villa with wonderful sunny terraces, a Jacuzzi and direct sea access. Throughout the villa are panoramic views of the Tyrrhenian sea, the northern Sicilian coastline and Cefalù, considered one of the most beautiful villages of the island.

The sea and sky seamlessly flow into the villa’s airy interiors, thanks to its many windows, high ceilings and crisp white walls. The vast open-plan living and dining room, in tones of light blue, grey and browns, has a large dining table, stylish contemporary furniture and an original seating area that facilitates both private moments and group gatherings. Against one wall is the convenient open kitchen, equipped with the latest appliances.

The second floor contains the villa’s four bedrooms, all individually decorated with designer mirrors, contemporary art and attractive mid-century style chairs. They each have en-suite bathrooms, three with unique waterfall showers and one with tub and shower. One bedroom has a private patio and the other rooms have access to a long balcony with expansive views of the sparkling sea.

The living room leads onto a large two-level terrace which has outdoor dining, seating and lounge areas with the immediate backdrop of turquoise waters. You can take a refreshing dip following the set of steps leads down to the sea. You’ll dry off in no time lapping up the blissful Sicilian rays on one of the deluxe sun loungers.

Historic Cefalù can be reached in a few minutes’ drive. Famous for its medieval Arab-Norman cathedral, it has an attractive town center, bustling with cafés and shops, as well as a pretty harbor. It also boosts a beautiful beach and a natural reserve can be visited nearby. Slightly further afield are other picturesque towns, archaeological sites and the cultural treasures of Palermo, the capital of the island located only 50 kilometers away.

• Access to private beach
• Large Jacuzzi (6 m²) and outdoor shower
• Vast sunny terrace with comfortable outdoor furniture, sunbeds and a dining area
• The villa is set within a large garden and surrounded by trees and scrubs
• Private parking

• The villa is approximately 200 sqm and is spread over two floors
• All rooms have a direct access to covered outdoor space offering the opportunity to relax in front of the colorful garden.
• There is a large open space living and dining room with stylish furnishings and a built-in fireplace
• Luxurious details include marble floors, waterfall showers and fine bed linens
• Exceptional views of the sea, the town of Cefalù and the undulating Sicilian coast
• Compact well equipped kitchen, separate laundry room and bathroom on ground floor
• Four en suite double bedrooms with a individual and unique decor

• Cefalu: One of Sicily’s prettiest towns and located right next to the villa, Cefalu’s narrow lanes are filled with fascinating historic sites. shops, restaurants and cafés. The town is dominated by its 12th-century fortress-like cathedral, a must visit. You can learn more about the area’s early history at the Museo Mandralisca, a notable archaeology museum. There is also a lovely harbor and west of town are the beautiful beaches of Mazzaforno and Settefrati.
• Palermo: Founded by the Phoenicians in the 8th century AD, the capital of the island is a cultural delight. A crossroads of cultures, Palermo has splendid Baroque churches, gothic palaces and colourful markets. Built over the centuries, for a time, the cathedral served as a mosque leading to some Arabesque architectural features. The mosaic ladened Palatine Chapel is one the best preserved examples of Byzantine architecture in Europe and the Royal Palace was formerly the main seat of the kings of Sicily.
• Piazza Armerina: Located in the centre of the island, this important medieval city has a 14th century Aragonese castle, Baroque and Renaissance townhouses and mansions and many charming cobbled streets. There are also several wonderful churches, among them San Martino, home to a famous Black Madonna icon.
• Agrigento: One of Sicily’s oldest towns, most visitors come here for the Valley of the Temples. At 1,300 hectares, the UNESCO World Heritage Site is the largest archaeological site in the world and is one of the most outstanding examples of ancient Greece art and architecture. Further ancient artefacts can be viewed in the town’s Archaeological Museum. There are also many medieval historic sites of interest including the Cathedral of San Gerlando, the Santa Maria dei Greci church and Abbey of Santo Spirito.
• Catania: Sicily’s second largest city, marvellous Catania is filled with UNESCO listed heritage like the decadent Baroque Biscari Palace, the Monasteries of San Benedetto and San Nicolò l’Arena. Foodies should make a stop at its vibrant fish market and at one of the 19th century kiosks found around town selling sparkling water with anise.
• Acireale: this is an elegant baroque coastal town situated a few kilometers from Catania. It is home to a number of beautiful baroque churches as well as Sicily’s oldest art academy. For a taste of the area’s exquisite nature, spend some time in the Riserva Naturale Orientata La Timpa, with stunning cliff top views and a lovely rocky beach for those who can climb down to it.
• Taormina: this hilltop town is one of the most magical on the island and features magnificent views of the sea and Mount Etna. You can enjoy enjoy this panorama and a lively ambiance in the Piazza IX Aprile. The town’s most famous site monument is its Greek theatre, dating back to the 3rd century BC and with a capacity of 5,000 spectators. For some shopping head to Corso Umberto and for some peace and quiet stroll around the bucolic Villa Comunale public garden.
• Syracuse: Hugging a jagged point on the Ionian coast of Sicily, this city is famous for its ancient ruins found in the Archaeological Park Neapolis. Here you can find an impressive Roman Amphitheater and the Teatro Greco. Near the park are the ancient Catacombs of San Giovanni Evangelista, containing almost 10,000 graves from small niches to elaborate arched chambers.
• Noto: a quintessential baroque town, Noto has grand buildings made of pink tufa stone that glimmer in the sun. The streets behind Corso Vittorio Emanuele have the loveliest decorative details on the facades and curved balconies, the perfect example being the Palazzo Nicolaci di Villadorata, with its grotesque balconies.
• The Aeolian Islands: This magical volcanic archipelago north of Sicily is made up of seven inhabited islands, each with a distinct personality and charm. They are covered in pristine nature, exquisite beaches, intriguing caves and cliffs with soaring views, the perfect destination for nature lovers and avid hikers.
• Mount Etna National Park: Sicily’s legendary landmark and one of the most active volcanoes in the world, Mount Etna has been since an object of awe and veneration since Antiquity and has been the subject of countless myths and observations by Greeks, Celts and Romans.The ​​60,000 hectare park is home to an immense variety of flora and fauna and is now a UNESCO World Heritage site. A visit to the park will be a top highlight of your Sicilian holiday.
To receive a complete overview of activities and sightseeing in the area, contact Katharina or Gaia at contact@excellence.villas We will promptly email you an exhaustive document.