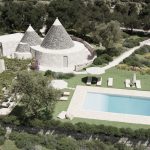 The trullo Petriolo with its private pool 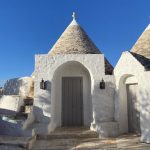 The wrap around stairs lead up to a roof terrace 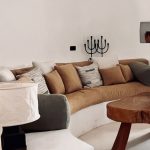 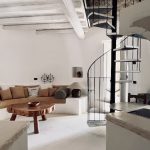 The stairs lead up to the mezzanine 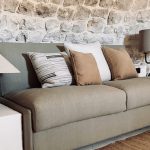 The sofa bed on the mezzanine 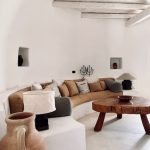 Another view of the living room 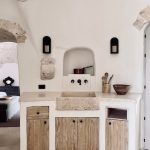 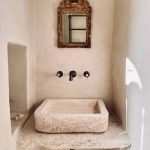 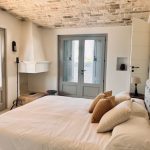 The master bedroom with vaulted ceiling 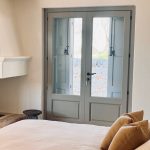 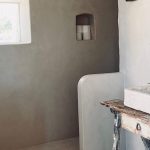 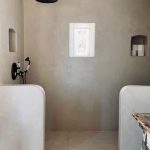 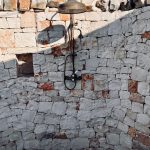 The outdoor shower of the master bedroom 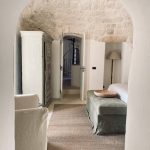 The second bedroom, also on the ground floor 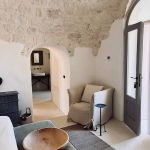 View towards the en-suite bathroom 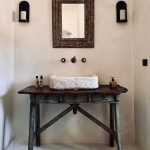 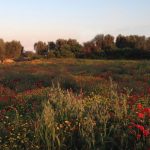 The surrouding landscape in a mellow evening light

Trullo Petriolo
Puglia
A delightful 2+1 bedroom "trullo" built in local stone, with private pool and only 6km from the beach and the beautiful town of Monopoli.

Located in the heart of Puglia and a mere short drive to the beach, the Trullo Petriolo is a masterfully restored traditional farm building, the famous cone shaped Trulli.

Restored in 2021, the Trullo sits within a large private garden, and is part of a 50 hectare (120 acres) organic farm. The building dates back to the mid 1700s, probably home to the foreman or head farmer of the close by Masseria Petriolo.

The farmhouse is made up of two traditional cone shaped buildings and an adjacent former oven and cistern. They are built using limestones from the surrounding fields, stacked without any mortar. The exterior staircases wrap around the cones leading up to a rooftop terrace with views of nearby deep blue Adriatic.

The interior design features a soothing palette of greens, greys and beiges, creating a harmonious atmosphere within the house’s massive stone walls.

The inside space is more than doubled thanks to the extensive paved outdoor living spaces with living room, kitchen and dining room under several pergolas. The outdoor living space and pool are a real highlight. Peacefulness reigns over the estate’s sprawling farmland of organic vineyards, olive groves and lavender plantations.

Off the estate, guests can enjoy a trip to the beach or to various fishing villages and historic sites which provide a window into this very untouched and enchanting region of Italy.

• Daily continental breakfast buffet (croissants & fresh fruit) will be laid out everyday at 8.30 am at the pool pergola kitchen or inside (depending on weather)
• Cleaning included 2 x per week
• Linen changes 2 x per week

• Monopoli sits tranquilly overlooking the Adriatico sea much as it must have done when it was part of the Marine Republic of Amalfi and Venice between the 11th and 15th centuries. Head straight to the small port, or Molo Vecchio, where the traditional fishing boats still shore up for the night and marvel at the recently restored 'golden' walls of the castle which contrast spectacularly with the blues of the of the sea and sky. This and the surrounding fortifications date from 1552. Originally part of ancient Peucezia, Monopoli enjoyed important influence over the territory south of Bari following the destruction of Egnazia. Also worth a visit is the Abbey Castle of Santo Stefano three kilometers south east of Monopoli. Here the Vie Traiana and Minucia arrived at ancient Diria. Do take time to see the Museum of 'Vases from Egnazia'.
• Bari. Bari Vecchia is a walled city crowded on a peninsula jutting into the sea. There was no room for expansion and the resulting overcrowding has meant that life is lived on the streets. Wander down the narrow alleyways you will feel like walking through someone’s living room, or well, everyone’s living room. Entire families from grandparents to babies sat outside their homes chatting, playing, napping, while washing dangled from balconies and scooters whizzed past.
It’s not just relaxing and socialising that takes place in the streets. In the mornings they become a pasta factory as women sit at tables outside their homes making the typical Puglian pasta orecchiette. These “little ears” are made by rolling the dough into thin logs, cutting off a chunk with a knife and shaping it by hand—all at an impressively rapid pace. If you get lost in Bari Vecchia, look down. The black stone pavement was laid to help visiting merchants navigate their way out after market day; the white limestone paving will take you deeper into the maze. Don’t forget to taste the focaccia smeared with roasted cherry tomatoes, olives and glistening with local olive oil.
• Alberobello stands to the southern part of Bari province, near Castellana Grotte, Locorotondo and Putignano. The town was founded in the 15th century by Acquaviva-D'Aragona, two counts of Conversano, on land that was originally an oak forest. A typical feature of Alberobello are the trulli, white dry-stone houses with conical roofs made of lapidary stones. Inside, the trulli have a square central room communicating with the other rooms of the house via arches. Many trulli in Alberobello can be visited and the tallest trullo in the area, Trullo Sovrano, is on two floors and houses a museum. The roofs of the trulli are embellished with decorations and pinnacles of various shapes, often symbolising religious signs or signs of the zodiac.In 1996, Unesco made the town of Alberobello a world heritage site.
• Ostuni, La Città Bianca, the white city, is one of Puglia’s most beautiful cities, a tumble of white-washed buildings perched strategically atop a hill with views of the endless olive trees in the Valle d’Itria countryside, and the glimmering Adriatic Sea. The medieval walled city was built without a plan, and it shows. The web of streets is confusing, a maze of alleyways, staircases and arches. Buildings were built on top of each other, and the archways support the houses they connect, making up for the lack of strong foundations. You turn one way and find a dead end, another and get a glimpse of the sapphire sea. Puglia has seen a stream of invaders—Greeks, Romans, Goths, Byzantines, Normans—and the labyrinth of Ostuni is the perfect way to confuse the enemy. The stark white buildings are dazzling in the southern sun and are brightened by vivid green and blue wooden doors, pots of red geraniums and cacti. In the 17th century a plague killed millions in the area and infected houses were painted white by mixing limestone dust with water. Locals noticed that there was less illness around the white houses and attributed it to a miracle; most likely it was the antibacterial effect of the calcium carbonate. Nowadays the white houses attract tourists and the local government encourages everyone to repaint every two years by paying for half the cost.The main street in Ostuni is lined with boutiques and souvenir shops selling local olive oil and Salentino sandals, but the best way to experience the town is by diving down the narrow side streets and like the invaders once did, getting lost.
At Ostuni’s highest point you’ll find the Cathedral, built in the 15th century in the late Gothic style, rare in Puglia where most of the churches are austere Romanesque or ornate Baroque. Its graceful lines lead to the sky and there’s a magnificent rose window with Christ at the centre surrounded by 24 finely carved columns representing the hours of the day. Visite on a Saturday, Ostuni’s market day. It’s very much a local place—most tourists don’t make it here on the edge of town—and is foodie heaven. Browse the stalls of bulbous round cucumbers, fresh almonds in brine, dried figs, piles of walnuts, aromatic bunches of oregano, twin balls of caciocavallo cheese dangling from string, trays of snails, entire octopus, and mounds of vibrant red chiles, sweet and spicy, round, bell-shaped and long.

The Salento
The Salento is a hot, dry peninsula at the southern tip of Puglia. Its geographical isolation has meant that it has developed a strong identity with its own cuisine, traditions and music, influenced by its Greek past. Along with some of Italy’s best beaches there are some fascinating towns to explore.
• Lecce is known for its exuberant baroque architecture in the golden Leccese stone of the area, its churches lavishly decorated with cherubs, gargoyles and griffins, and delicately carved columns and cornices. Lecce is one of Puglia’s larger cities but it’s still a walkable size, and it manages to be both lively and relaxed.
• Otranto has a stunning coastal location where you can combine morning visits to churches with an afternoon swimming in the clean, impossibly turquoise sea. It’s just 72 km from Albania and its location has resulted in many invasions, the worst of which was the Turkish siege in 1480 when they destroyed much of the city and tortured and killed its people. Otranto’s principal attraction is the Cathedral with its mosaic floor built in 1163-1165— it survived the Turkish invasion although parts of the Cathedral were destroyed. It’s one of the largest mosaics in Europe and covers the entire floor. Its central motif is the Tree of Life, supported at the base by elephants, a symbol of purity, with branches telling different pagan and biblical stories. Another tree near the front of the church depicts heaven on one side and grizzly scenes from hell on the other. In the chapel you can see the human remains of the 800 martyrs who resisted the Turkish invasion and refused to convert to Islam. The empty sockets of hundreds of skulls stare down at you in stark contrast to the beauty of the mosaic floor.
• Gallipolli’s old town is on a island connected by a causeway to the mainland. It has a relaxed, elegant vibe, some stunning churches, and a golden curve of sand right in the centre of town, plus many more along the surrounding coast. It was ruled by the Greeks for five centuries between 7th and 2nd century BC, but all signs of their existence were destroyed by the Romans and most of the architecture seen now is from the Middle Ages.
Other than leisurely walks along the city’s seafront walls, the most interesting thing to do in Gallipolli is visit Frantoio Ipogeo in Granafei Palace one of the 35 underground olive presses. It was first used in 1600, excavated by hand out of the soft rock, to make olive oil for lamps which was exported around the world. You can see the original equipment used for grinding and pressing the olives and get a sense of what it was like to work in this dark, damp cave. Blindfolded donkeys were used to work the olive mill and they lived down here with the workers who smoked weeds and carved little sculptures to distract themselves from the miserable conditions.
To receive a complete overview of activities and sightseeing in the area, contact Katharina or Gaia at contact@excellence.villas We will promptly email you an exhaustive document.