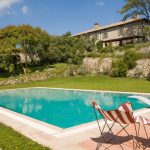 The villa looks down on the sunny pool area 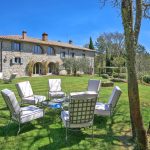 The villa Barbara and its verdant natural setting 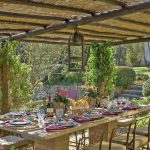 The shady pergola, located just outside of the summer kitchen, is perfect for al fresco meals 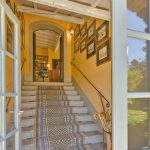 The stairs leading into the villa 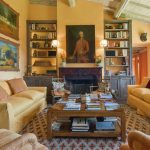 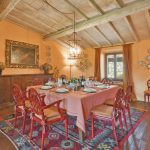 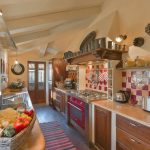 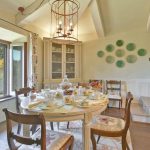 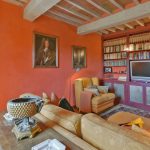 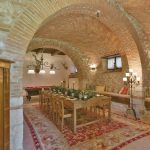 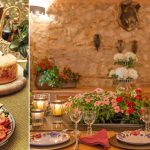 Feast on delicious Tuscan cuisine during your stay at the villa 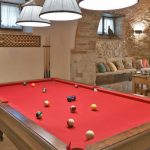 After dinner you can enjoy hours of family fun 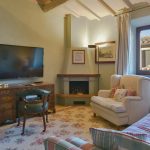 The light green suite has its own sitting area, fireplace and flat screen TV 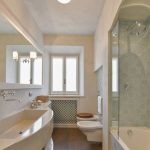 All bathrooms are brand new, and this one also has a lot of natural light 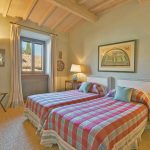 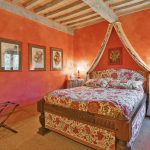 The orange suite has this beautiful queen room in red hues 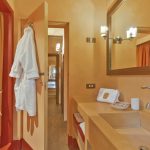 A great ensuite bathroom with a large stone wash bassin 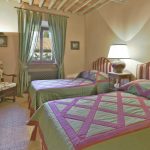 And a twin, decorated in teal and violet tones 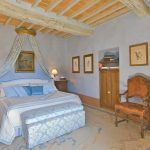 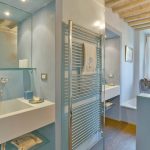 The master en suite has a great tub, 2 large wash basins and a shower 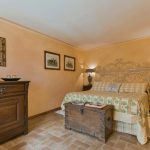 This yellow bedroom, accessible from the garden, features vintage prints and historic furniture 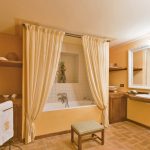 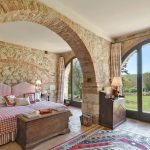 The red bedroom has vast windows looking onto the garden 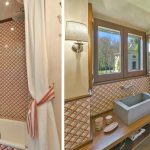 Its en suite in the same color palette 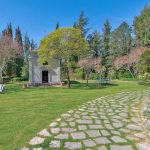 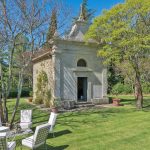 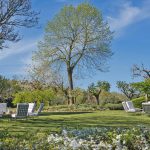 Surround yourself in peaceful nature at the villa Barbara 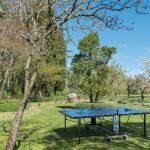 The garden also has a pingpong table for further outdoor entertainment 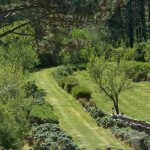 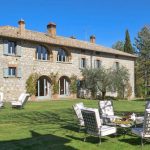 Villa Barbara
Tuscany
The perfect country retreat, this restored villa with a pool is nestled within a vast private estate in southern Tuscany’s renowned Val d’Orcia.

With gorgeous historic details, excellent modern amenities and a sublime location within the rolling hills of a 1700-acre estate, this restored country house is the ideal destination for those seeking a peaceful and luxurious holiday in one of the most splendid areas of Italy.

Large arched windows cast wonderful light into the villa’s refined interiors, its vaulted stone ceilings and wooden beams complementary of its stylish country manor decor. Guests can gather in its various inviting spaces including a first floor living room with a fireplace, a cozy sitting room with plasma satellite TV and a living/game room with its own dining area and open kitchen nook. Meals can be prepared in the fully-equipped kitchen and served in the main dining room decorated with antiques and vintage porcelain plates.

The individually decorated bedrooms, ranging in size from twin to larger queen and king rooms, are spread across the villa’s two levels. The master queen suite has a private bathroom with a unique soaking tub and a shower stall. Additional privacy is granted to one of the bedrooms which is accessible via a separate garden entrance.

During the day guests can make full use of the grounds comprised of manicured gardens, a sprawling lawn, a soccer field, a large swimming pool and expansive woods, ideal for leisurely afternoon walks. In the evening, make the most of the starry nights during al fresco dinners or drinks under the villa’s shaded pergola.

Please note that the property has gated entrances only accessible by code. Carlos, the night guard, lives on the little house next to the villa. Every morning he sets up the pool chairs and sunbeds and the rest of the day he works on the estate. He is available all night in case guests need anything

There are many pleasures in the Val d’Orcia within easy reach. Nearby is the medieval town San Casciano dei Bagni where you can enjoy a fabulously designed therapeutic spa dating back to Roman times. A short drive away are also some of Italy’s most prestigious wine villages such as Montepulciano, Montalcino, and Cetona as well as many other cultural treasures which will enhance your divine stay in Southern Tuscany.

• Main living area with a wood paneled fireplace and dining table seating 12
• Intimate breakfast room
• Sitting room with plasma, satellite TV
• Billiard table
• Double size living/game room with its own dining area and open kitchen nook
• 6 individually decorated bedrooms, ranging in size from twin to larger queen and king rooms, are spread across the villa’s two levels
• The master queen suite has a private bathroom with a soaking tub and a shower stall
• One of the bedrooms is accessible via separate garden entrance

• Gigliola and her staff provide daily housekeeping service for 4 hours/day, 2 hours on Sunday
• Carlos opens the pool and sets up the sunbeds each morning for the guests
• Gardener and pool maintenance

• Welcome to the Val D’Orcia: hills outlined by endless rows of cypress trees, majestic castles, thermal spa towns, tiny medieval villages surrounded by olive groves and wine cellars everywhere full of oak and chestnut casks in which to age world class wine. Not surprisingly, the breathtakingly beautiful Val d'Orcia has been the setting for many films. The English Patient was set in Pienza and at the Monastery of Sant' Anna in Camprena, Romeo and Juliet was filmed in Pienza, scenes from Gladiator feature the Pienza countryside, and Under the Tuscan Sun was filmed in Montepulciano.
• Cetona conserves the characteristic structure a Medieval village, with alleys and narrow streets that spiral through the town, ending at the fortress above. The prehistoric settlement of Belvedere, 4,000 years old, is worth a visit, while the Civic Museum of the Prehistory of Monte Cetona is interesting, conserving artefacts that range from the Paleolithic to the Bronze Age.
• Those needing pampering can chill out at the thermal baths in Bagni San Filippo
• Montepulciano is a graceful Tuscan hill town, best known for it’s Vino Nobile di Montepulciano, which was being praised by connoisseurs over 200 years ago and can certainly contend with Italy’s best today. The many churches and handsome palazzo, the steep cobbled alleys and vine-trailing stone bastions are essential viewing for anyone venturing south of Siena. On a clear day from the top of the town you have tremendous panoramic views across the countryside, stretching towards Assisi’s Monte Subasio, Monte Amiata, the Val d’Orcia, Pienza, and even the towers of Siena: 40 km (1 hr drive)
• Pienza - the unfinished “utopian” city, was commissioned by Pope Pius II in 1459. In just three years the cathedral, the papal and bishop’s palaces and the central part of the town were completed, but the extensive project ended abruptly when Pius died only two years after the consecration of the cathedral: 57 km (1 hr drive)
• San Quirico d'Orcia is a walled village with Etruscan origins. From the 11th century, the village had a rapid growth due to its proximity to the Via Francigena. Most of San Quirico’s fortified walls are still standing, so you must leave the car outside the city walls. Things you shouldn't miss: the Collegiata: originally, this was an 8th century rural church with a baptismal font rebuilt in the 12th century. The church of Santa Maria Assunta. The Horti Leonini: designed by Diomede Leoni in 1561, this is an example of a symmetrical Italian garden. San Quirico d’Orcia cypress trees: they are the most photographed trees in the world! Madonna di Vitaleta chapel: this is one of the most famous features of the Val d’Orcia and it’s situated just a couple of kilometres outside San Quirico, on a dirt road leading from Pienza to San Quirico d'Orcia.
• The charming town of Bagno Vignoni, in the heart of the Val d’Orcia Park, named a World Heritage Site by UNESCO, developed around a substantial basin well-known for its miraculously curative waters. These springs were highly regarded as far back as written history goes, due in large part to their proximity to the via Francigena pilgrimage route.
• In Perugia, be sure to see the frescoes by local artist Pietro Perugino in the Galleria Nazionale dell’Umbria and in the town hall’s Sala del Cambio. Step back to ancient times at the Etruscan arch and Etruscan well. Enjoy the lively atmosphere at the large fountain, the Fontana Maggiore. Sample the chocolates named for the city. Perugia plays host to international visitors with its acclaimed annual Umbria Jazz Festival, held each July. A wildly popular chocolate festival every October pays homage to the city’s sweet side.
• Montalcino is beautifully situated on a hill inhabited since Etruscan times, swathed in vineyards and olive groves. It is a quiet, affluent, attractive town with pretty buildings and flower-filled squares, and many shops selling the Brunello di Montalcino: 66km (1 hr 15 min drive)