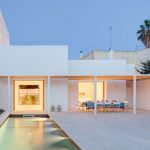 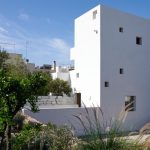 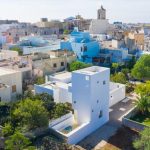 It sits in a secluded niche of the seaside town of Gagliano del Capo. 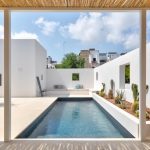 It excels at fluid indoor-outdoor living. 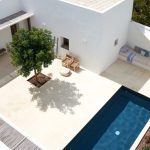 This is made possible by its central courtyard. 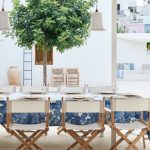 It has a lovely dining area… 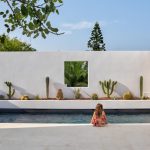 … as well as a long pool flacked by local vegetation and seating. 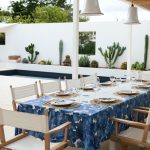 The dining area overlooks the pool and has direct access indoors. 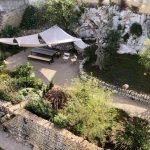 There is a garden with a covered seating-dining area. 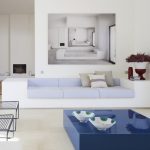 The interior has clean lines and stylish contemporary design items. 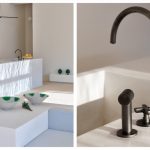 Simple, yet luxurious, like here in the open-plan kitchen. 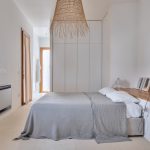 The Master bedroom is on the ground floor… 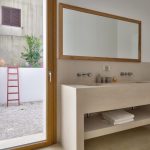 … it has a large bathroom with double wash basins. 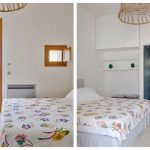 The Courtyard bedroom I with hints of colour. 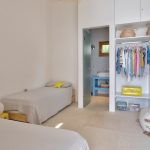 The Courtyard bedroom II, ideal for the kids. 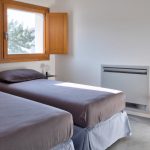 In the tower there is another twin room. 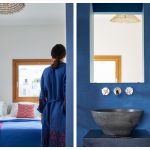 As well as two other double rooms… 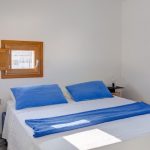 The second double bedroom in the tower. 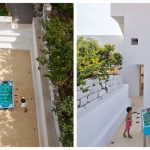 There is a second mall patio which has a summer kitchen and a foosball table. 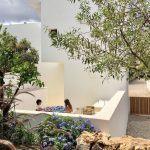 Another angle of the second patio, encircle by greenery. 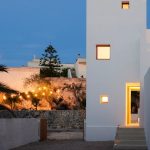 The ambiance is enchanting in the evenings… 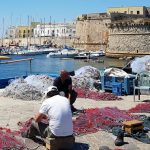 Leaving the villa, there is plenty to visit in the area, like the authentic fishing village of Gallipoli. 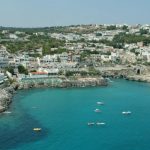 The clifftop town of Castro is also delightful… 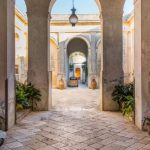 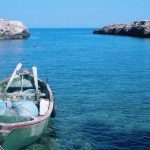 You can also take a boat ride to admire the coastline,… 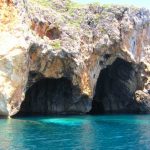 … or enjoy a refreshing dip in the stunning turquoise waters found in the area. 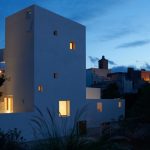 And at the end of the day, enjoy a serene night’s sleep back at the Villa Bianca!

Villa Bianca
Puglia
A haven of tranquility and style, this architect-designed villa with a pool is found in an authentic village on the rocky cliffs of Puglia.

Designed by an Italian architect living in London, every detail has been carefully considered in the making of this stylish minimalistic villa found in Gagliano del Capo. A modern take on the historic Norman towers which dot Salento, the southernmost region of Puglia in the heel of Italy’s boot, Villa Bianca offers a private oasis all the while being in the heart of a typical Italian village and walking distance to a beautiful beach.

The main terrace has a long swimming pool bordered by a Mediterranean garden, a built-in seating area and a covered dining terrace. A small patio has a summer kitchen and a foosball table. The ground floor of the villa features a large bright living room, with built-in sofas, which overlooks the pool. Around the corner from this is a well-equipped kitchen and dining area with direct access to the outdoor dining terrace.

A Master, double and a twin bedroom are located on the ground floor whereas two other doubles (one which can be a twin) are located in the 12-meter-high tower. The bedrooms have a pure decor accented with woven lamps, natural fibers and touches of sea tones. The Master has a sitting area and access to a secret garden. The en suite bathrooms have contemporary fixtures, beautiful basins and either showers or tubs.

From the top of the tower one can glimpse the sea, which can also be reached via a footpath from the village. Gagliano del Capo is a traditional village filled with plenty of authentic character. It is situated within a regional park that extends between the rocky Adriatic coast and the sandy beaches of the Ionian Sea. In addition to days at the beach, Salento has an abundance of other places of interest including the Baroque city of Lecce, and the picturesque towns of Ceglie Messapica and Ostuni.

• Newly built villa, a modern interpretation of traditional local architecture
• Villa revolves around a central courtyard with a Mediterranean garden and fruit and vegetable garden
• Lounge area with built-in softas, shaded by a curtain
· Dining table under bamboo covered patio, BBQ and direct access to indoor kitchen
• Long swimming pool (8m x 2.75m, 1.40m deep)
• Secret garden only accessible from the Master bedroom
• Side terrace with summer kitchen and foosball table
• Two additional terraces, one above the living room and one at the top of the tower

• Two hours per day of maintenance of the external and the internal stone paving.
• General maintenance of the swimming pool and the garden.
• On a Wednesday, change of towels
• On a Saturday, change of sheets and light cleaning of the house (only for two weeks booking)
• A/C. Any consumption beyond the 300KW per week will be charged at a rate of 0,40 per KW and will be detracted from the deposit allowance. The housekeeper will provide the meter reading at the check-in and at the checkout.

• The Salento is a hot, dry peninsula at the southern tip of Puglia. Its geographical isolation has meant that it has developed a strong identity with its own cuisine, traditions and music, influenced by its Greek past. Along with some of Italy’s best beaches there are some fascinating towns to explore.
• Santa Maria Leuca, the town between two seas - Santa Maria di Leuca is the point of the peninsula's stiletto heel. The Greeks called it Leukos, meaning brilliant sun, while the Romans called it "the place at the end of the earth". Situated in the prime part of the Salento, Leuca is a paradise on a promontory between two seas.
• Castro - Situated on a hill overhanging the sea and is referred to as the "pearl of the Salento. The setting with turquoise skies, green hills, white washed buildings and sapphire water is captivating.
• The caves of Zinzulusa - A majestic opening in a sheer sea cliff near Castro welcomes you to the Zinzulusa Cave, one of Salento's most impressive karstic phenomena.
• Gallipolli’s old town is on a island connected by a causeway to the mainland. It has a relaxed, elegant vibe, some stunning churches, and a golden curve of sand right in the centre of town, plus many more along the surrounding coast. It was ruled by the Greeks for five centuries between 7th and 2nd century BC, but all signs of their existence were destroyed by the Romans and most of the architecture seen now is from the Middle Ages.
• Other than leisurely walks along the city’s seafront walls, the most interesting thing to do in Gallipolli is visit Frantoio Ipogeo in Granafei Palace, one of the 35 underground olive presses. It was first used in 1600, excavated by hand out of the soft rock, to make olive oil for lamps which was exported around the world. You can see the original equipment used for grinding and pressing the olives and get a sense of what it was like to work in this dark, damp cave. Salento is the most beautiful part of Apulia, the hottest, the most sparkling and with the same old reality the Italian coastal scenery has to show the whole world.
• Otranto has a stunning coastal location where you can combine morning visits to churches with an afternoon swimming in the clean, impossibly turquoise sea. Otranto’s principal attraction is the Cathedral with its mosaic floor built in 1163-1165— it survived the Turkish invasion although parts of the Cathedral were destroyed.
• Lecce, the Baroque city known as the Florence of the South. with its historical Baroque abodes awaiting to be discovered, its piazzas, old villages and hamlets. Its culinary specialities, pasticciotti (sweet pies filled with custard), rustici (savory pastries filled with mozzarella cheese and tomato), turcineddi (rolled meat similar to haggis) ciceri e tria (chickpeas with pieces of fried fresh pasta).
• Porto Cesareo - The popular seaside resort has an amazing 17 kilometers of golden beach facing an archipelago of low-lying islands that form a protected bay. The water is calm and clear. Porto Cesareo is also the home of a nature preserve that is a marine protected area rich in flora and fauna with very rare species. Underwater excursions allow for viewing of the unique coral formations, turtles, sea horses, and other marine life.
• Ostuni, La Città Bianca, the white city, is one of Puglia’s most beautiful cities, a tumble of white-washed buildings perched strategically atop a hill with views of the endless olive trees in the Valle d’Itria countryside, and the glimmering Adriatic Sea. The medieval walled city has a maze of alleyways, staircases and arches.The main street in Ostuni is lined with boutiques and souvenir shops selling local olive oil and Salentino sandals. At the town’s highest point you’ll find the Cathedral. Built in the 15th century in the late Gothic style, it has a magnificent rose window with Christ at the centre surrounded by 24 finely carved columns representing the hours of the day. Aim to visit on a Saturday, to experience the town’s market day to browse the stalls of round cucumbers, fresh almonds, dried figs, fresh cheese, aromatic herbs and more.